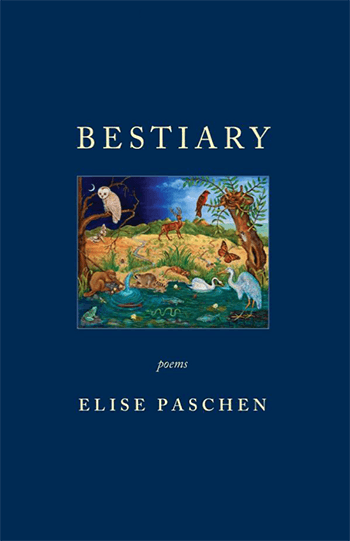 “The passionate, yet controlled, third volume from Paschen (Infidelities) pursues the likenesses between human beings and other sorts of beasts: Paschen watches domestic animals, visits zoos and backyards, and records the instincts that animate her, as lover, mother, daughter and citizen. Husband and wife “share a wedded habitat”; a mother breastfeeding her daughter “would like to buzz/ into the orchid of your ear,” while a manatee looks to the poet like “a mistaken mermaid,/ on the brink of vanishing from sight.” Paschen offers sonnets, villanelles and even a ghazal, in which butterflies in an exhibit “invent a sky beneath the dome.” Readers might remember not the moments of pure description, but the difficult emotions Paschen describes in her poems about marital love, motherhood and finally a daughter’s grief. The urn with her father’s ashes dominates one poem, and her mother’s career as a ballet dancer takes over another: “Mother, when I was young, I watched/ you from the wings and saw the sweat,” Paschen writes, saw “your gasp/ for breath. I thought it was your last.” If we are animals, Paschen suggests, we are the animals who look hard at one another, the animals who remember and who mourn”.
–Publishers Weekly, January 2009

“Can a book so attached to death be filled with so much life? The answer is yes and Bestiary proves it! It is focused also on form and light and wonder; a fine song of praise to living things. All praise to this brave poet and these brave poems!”
– Lucille Clifton

“With Bestiary Elise Paschen comes into her own strength as a poet, taking on the two great subjects of lyric poetry, love and death. This volume beautifully contains its opposites: it is at once the story of a young couple building their family and the story of a daughter losing her parents, as well as a more mythic undertaking, a tale of the animals who symbolize our psyches and seem to foreshadow events in our human lives. One feels Paschen’s Osage roots in these poems where she makes the deepest emotions palpable through her stunning craft. In Bestiary Elise Paschen creates a world at once recognizable and strange, lyrical and fierce, gentle and bold.”
– Molly Peacock

“Elise Paschen’s themes are human and essential: love and gestation and birth, the decline of parents in old age — and in her skilled hands, these matters seem far from ordinary. Often her poems engage us with stories, some taken from myth — Leda beset by Zeus in swan’s clothing, a mad Irish princess tamed by a harp player. Others seem drawn from experience, whether actual or imaginary: a woman thrown to the ground by a whirlwind, a family rescuing a fallen nestling, an aged and afflicted mother recalling her youth as a dancer in Venice, a daughter transporting a father’s ashes through airport security. Here are powerful lines, gracefully woven into whole poems, positioned to last. Certain of them will haunt you. Read the lovely and mysterious “Monarch,” first poem in the book, and right away you’ll see what I mean.”
– X. J. Kennedy