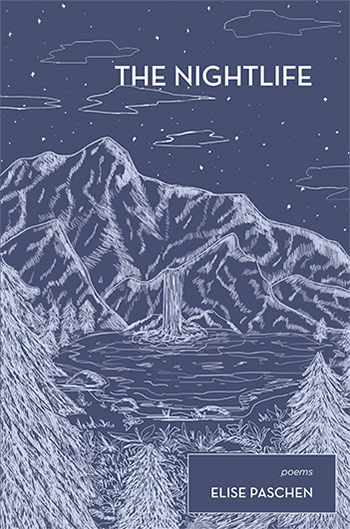 "The Wide Stars Above Our Sky"

In Elise Paschen’s prize-winning poetry collection, Infidelities, Richard Wilbur wrote that the poems “. . . draw upon a dream life which can deeply tincture the waking world.” In her third poetry book, The Nightlife, Paschen once again taps into dream states, creating a narrative which balances between the lived and the imagined life. Probing the tension between “The Elevated” and the “Falls,” she explores troubled love and relationships, the danger of accident and emotional volatility.

The Nightlife demonstrates Paschen’s versatility and formal mastery as she experiments with forms such as the pantoum, the villanelle and the tritina, as well as concrete poems and poems in free verse. Throughout this poetry collection, she interweaves lyric and narrative threads, creating a contrapuntal story-line. The book begins with a dive into deep water and ends with an opening into sky.

In lean and supple lyrics darted with alarming rhymes and laced with skirmishing patterns, Paschen (Bestiary, 2009), co-founder of Poetry in Motion, now in its twenty-fifth year of bringing poetry to the people, achieves breathtaking perfection of craft and form. The precision of her language and the bewitchment of her meter, her evocative use of parallel narrative lines and incantatory repetition, embody the yin-yang of existence: the matching of light with dark, bliss with pain, love with betrayal. Beach and sea are settings for family happiness and grave danger. A beloved house is a sanctuary and a place of secret treachery. Paschen writes of the disjointed logic of dreams, the munificence and struggle of a tree in Chicago, the English countryside, Native American ceremonies, and an airplane in the tartly funny “The Middle Seat.” A mother’s love is mapped by the chime of a cell phone; a daughter grieves. “Skein” and “Sinkhole” speak to human entanglements and despair. As these poised, elegant, wry, and knowing poems crisply unlock and gracefully unfurl, they reveal fresh perceptions at every turn.
— Donna Seaman, Booklist

“The Nightlife is not only a beautiful and inventive collection, it’s an important contribution to this period in American poetry. Paschen’s voice shows us how—given all the choices in form, voice, subject, and vision—a poet might make the art her own through the force of her personal brilliance, and a generous and idiosyncratic sensibility. In this work it is as if ‘. . . she unhinged every / window . . .’ These are poems you return to not only for the music and the detail—equally powerful through her wide-angle lens as under her magnifying glass—but to puzzle out how she managed it.  So much craft in work that reads so freely, seems to have issued forth so effortlessly, but also from some supernatural source, poems that read as if the poet were ‘. . . trying to put back / the wild fury she had released.’ This is poetry that reminds us of all the power and possibilities of poetry itself.”
—Laura Kasischke, winner of the National Book Critics Circle Award

“Scrupulously crafted and deeply affecting, the poems in Elise Paschen’s The Nightlife investigate certain varieties of persistence right at the root of what it means to be human: the persistence of reality into dream, of dream into waking life, of the dead among the living, and of the living through time, precarity, and loss. The sturdiness of Paschen’s sentence structure, her almost architectural sense of musicality, and a gorgeous, Neo-Imagist attentiveness to sensory detail (‘Cattails flat against dirt: an impression of deer’) often belie, but just barely, the huge sorrow and uncertainty that haunt the work, functioning the way the banister and reliably regular dimensions of steps on a darkened stairway do—leading us, in the end, to ‘a surprise of light.’ The Nightlife is the most profound and consummate book yet from one of today’s most formally astute poets, and one for whom to give lasting shape to experience feels not only like part of the meaning of what she makes, but much of the motive to make it in the first place.”
—Timothy Donnelly, winner of the Kingsley Tufts Poetry Award

“These poems are finely crafted boxes that are only opened at night when the family is asleep. They are hidden under the bed. One contains dreams that were lost then found. Within another are the oceans of all summers past. In another you open to find your mother and father dancing when they were young. This collection, which is graced by the moon and stars, is Paschen’s best. As she says in a haiku: ‘I entered the room / of this life to discover / time had come to move.’ And we are here, being moved.”
—Joy Harjo, winner of the Ruth Lilly Poetry Prize